Sukuh temple is located in Berjo Village, Argoyoso district, in the slope of mount Lawu 35 Km east of Solo at a height about 910 m above sea level. The temple stretches from the east to the west with the main gate in the west. Sukuh Temple is decorated with wayang stone carvings of Hindu origin, the only erotic temple in Java. The stepped pyramid is like the ones in South America of the Maya culture. The temples are distinctive compared with other ancient temples in Central Java such as Borobudur and Prambanan, and its uniqueness lies in the landscaping, statuettes, and relief. The temples occupy an 11,000m2 area and consist of three terraces, each connected with an ascending alley. The most influential part is the last terrace, at the very back of the compound. At this very sacred area, once erected a homogenous phallic statue, which is now displayed at the National Museum, Jakarta. 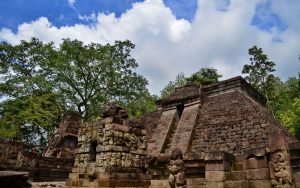 Another interesting and controversial factor of this historical site is the artistic relief on its floor, which depict male and female organs symbolizing the birth of life. This kind of construction is common in prehistoric time, especially in the megalithic era of pundan berundak (terrace grave). The temple consist of three terraces, the first terrace is the lowest level, followed by the second and the third above it. The terrace are connected with stairs to each other, each of it has an entrance gate. The temple has believed to be constructed in the 15th century during the declining years of Majapahit Empire. The relief found beside the first gate are believed had mean (sengkalan) reads Gapura Buta Aban Wong and Gapura Buta Anahut Bubut, meaning the year of 1359 saka or 1437 AD.

Johnson, the resident of Surakarta, first discovered the temple in 1815 in a very poor condition during the period of Raffles government. The first study in 1842 had done under the leadership of Dr. Van de Vlis, Hoepermans and was studied by Verbeek in 1889, and finally by Knebel in 1910. _In 1917 there had been an effort to secure and rescue by the office of prehistoric sites of the Netherlands East Indian Government. Then in 1989 the restoration was resumed by the Restoration and Maintenance of Prehistoric and Historic Project in Central Java. The view surrounding the temple is alluring. The road to this temple with impressive grandeur is surfaced all the way. The structure and the mood of Lawu Temple are different from other temples in Java, it is built like a Maya stepped pyramid, and so it is worth seeing.
Source http://www.indonesia-tourism.com/[/vc_column_text]

Is this your business?

Claim listing is the best way to manage this page and protect your business every time !